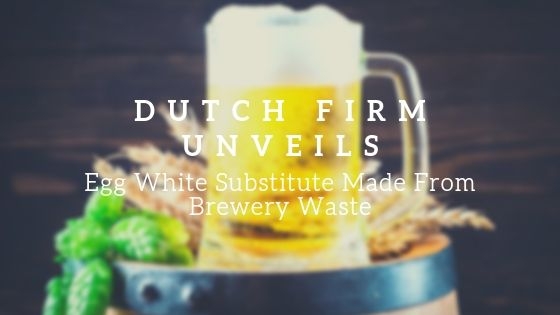 Vegans looking for an egg substitute are in luck as another option is being touted, this time in the form of yeast!

At around 65-70% protein compared to egg whites, the substitute can be used as a foaming agent – for example, in meringues – as well as for binding and to stable emulsions, such as mayonnaise.

It’s the result of a four-year research project at Wageningen University in the Netherlands. FUMI founders Corjan van den Berg and Edgar Suarez Garcia were studying the properties of microalgae, only to discover that certain processes, when applied to yeast, would create an ingredient that functioned similar to egg whites.

“It was amazing,” van den Berg told Food Navigator. “We could make meringues out of proteins made from brewer’s yeast.”

The founders were driven by the new product’s “extremely low carbon footprint”, which results in a 95% reduction of carbon dioxide when compared to the process of manufacturing dried egg whites. It’s also a great way of cutting brewery waste and reducing costs!

So, what about the taste? Well, the founders do say the yeast protein will taste ever so slightly of beer, though you’re likely to use it in relatively small amounts, so the flavour could be easily masked.

FUMI has secured funding to run a pilot project, and plans to open an investment round to eventually fund a facility to produce the new protein.